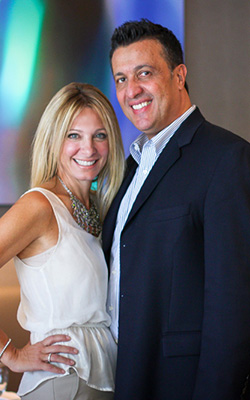 Jim Doukas is the proud owner of the new Garden City restaurant, REVEL Restaurant & Bar. Although his restaurant may be new, Doukas is no rookie in the upscale restaurant industry. With years of experience under his belt, as the former owner of two well-known establishments, Doukas is excited for this venture, saying, “REVEL will provide a dining experience with a focus on creative American cuisine inspired by global influences.”

Doukas first took a stab at the restaurant business when he opened Caffe Angelica of Garden City Park, NY. In its early years, this establishment was noted as “Long Island’s Best New Restaurant.” The old Italian favorite also earned a “Very Good” review from New York Times reviewer Joanne Starkey, as she called it her “dream meal” and was awarded three stars by Newsday’s Peter Gianotti. Prior to REVEL, Doukas opened a spot in Scarsdale, NY, called Central Square Café. The 400-seat establishment acquired recognition in several publications, including: Best New Restaurant, Best Sunday Brunch, Best Bar, Hottest Singles Spot, and Best Thursday Night. But the native New Hyde Park, New Yorker missed Long Island too much to stay away and returned in 2013.

Jim Doukas was born and raised on Long Island and later earned a degree in management from St. John’s University in Queens. He is a sports enthusiast, has a love for real estate development and restaurant construction, but most of all, calls himself a “proud husband and father to an amazing family.” Stop by REVEL today to see why his new restaurant has been voted one of the best restaurants nearby, or book your event in our private dining space online.

Sign Up to get the latest news, deals, & events